Around the country, lockdown has pushed millions into desperation: at risk people who can’t leave their homes; those starving themselves to pay rent; victims of domestic abuse; asylum seekers cut off from support; people who can’t get medication; everyone trapped inside with their demons.

Mutual aid sprang up to meet this enormous and immediate demand. But the support we can offer will be piecemeal and ineffective compared to the services we lost to austerity.

We founded Wolverhampton Mutual Aid as a Facebook group a month ago. In that time, it’s gained over 12,000 members, and hundreds are still joining every day. It’s fantastic to see so many people come out of the woodwork motivated by compassion and solidarity.

But enthusiasm does not create resilient communities overnight. We found that, while people interact online, many do not have strong connections in their neighbourhoods. The last 40 years have eroded much of Wolverhampton’s social fabric: the closure of key industries, the decline of the Unions, the loss of jobs and the ebbing away of nightlife and live music dovetailed with the expansion of social media, leaving people disconnected from those they lived nearest to. These networks have begun to reform, but this is just the start.

So necessary aid has been carried out by established voluntary and faith organisations. Outreach charities, community centres, faith groups, refuges and dedicated individuals around the city are working to provide for those who are already falling through the safety net – as they have always done.

These groups are crucial to the mutual aid effort: they are trusted locally; they have safeguarding procedures; they have budgets and financial policies; they have relationships to vulnerable people; and their members know one another. These groups have sprung into action when the government did not and provided an emergency community service.

But these organisations have been ruthlessly attacked by austerity – in the words of Alexei Sayle, the logic that the 2008 crash “happened because Wolverhampton had too many libraries”. Helping vulnerable groups isn’t a vote winner, so they are often the first to be cut. Many simply do not notice.

Since 2011, Wolverhampton Council has been denied £220,000,000 of funding. This has led to the closure of almost all of its youth centres as youth services were cut by 91%. It has severely impacted the organisations working to protect the most vulnerable – the Haven Women’s Refuge has had its statutory income slashed by over £300,000, Wolverhampton’s eighteen Sure Start Centres have become just 8 “family strengthening hubs,” where childcare is no longer on offer.

As we see in this fantastic article, austerity made Wolverhampton a virus hotspot. It is the UK’s 21st most deprived local authority. The average life expectancy in England for males and females is 63.5 and 64.1 – here, it is 56.4 and 59.5. 14% of the population are on out of work benefits (9% is the national average) and 30% of dependent children are in poverty (20% national average). These cause immense social and public health risks.

Despite these pressures, New Cross Hospital has been outrageously underfunded – in 2019,  it was asked to slash £24.5 million from its budget. One way they met these demands was by replacing registered nurses with unqualified ‘nursing associates’. The British Medical Journal claimed this would – on an average ward of 25 patients – increase the mortality rate by 21%.

So, you will understand my frustration when people accuse us of making mutual aid ‘political’: mutual aid is haunted by politics. Its ghosts are ten years of brutal Tory cuts, and the Blairite and Thatcherite governments that gutted our industries – the boom of big finance they ushered in brought Wolverhampton nothing.

Some parts of mutual aid could have been dreamed up in David Cameron’s “Big Society” – networks of local volunteers providing care so that the state doesn’t have to. But the obscene irony is that the set of policies David Cameron introduced, and which have been enacted by every Conservative government since, have destroyed the community’s capacity to respond.

The massive national explosion of mutual aid groups reflects the decimation of traditional support organisations. We know that the safety net is too thin, and we are stepping up now because there is a crisis. Mutual aid efforts are heroic, but they should not be necessary – and they will not be as effective as organisations which should still be around.

Many of us are motivated by the fear of a horrific loss of life in the pandemic. 100,000 people may die because of coronavirus. 120,000 have already died avoidable deaths because of austerity over the past decade.

Mutual aid groups must remember the ground on which they tread is the graveyard of organisations run by dedicated people to help their communities; organisations that the government decided weren’t necessary.

If you want a picture of the future, imagine a 99-year-old on a treadmill—forever. 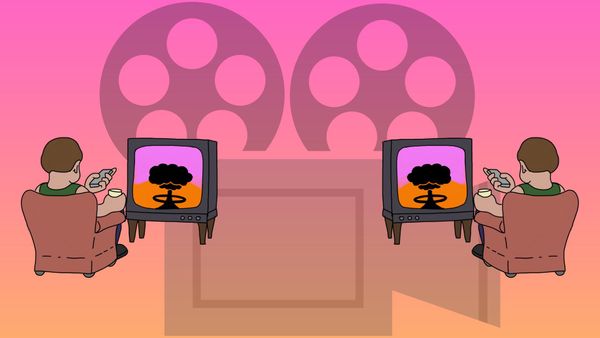 Four movies to take the edge off the isolation blues